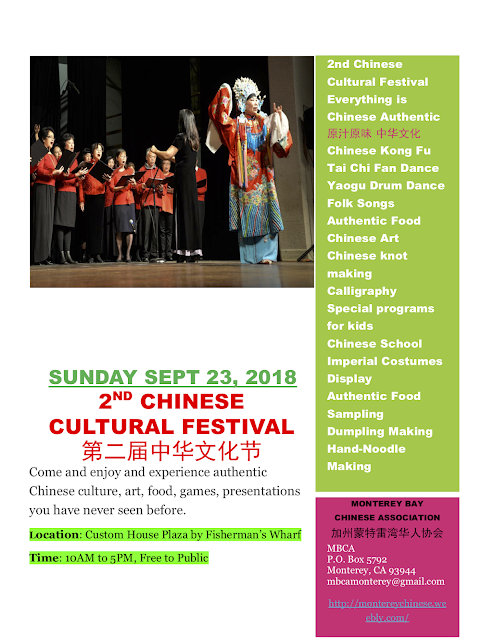 Join USCPFA on Sunday September 23, as we enjoy the 2nd Annual festival put on by the Monterey Bay Chinese Association.

Posted by Jana McBurney-Lin at 9:59 AM No comments:

Locke, 樂居,
The Only rural Chinese town left in the USA
by Winny Lin
co-chair of South Bay Chapter

Remember several years ago, I was on a tour bus to Yosemite National Park, and passed a sign in Chinese “樂居” and got very curious! On May 12, my husband, Kenny, and I finally got a chance to attend Locke Asian Pacific Spring Festival at this Locke, Historical District, an unincorporated community in California built by Chinese immigrants in 1915 for the Chinese.

With our 40 Walnut Creek Senior Club members, Lorraine came along. She grew up in Locke, and gave us a very detailed description of her childhood life on the bus. Her father and three uncles were among the 600 Chinese that used to live in Locke and raised their families in this town in Sacramento-San Joaquin River Delta. It is located in the primarily agricultural region, so she said she picked pears and ate them off the tree and never understood why people paid for them. As a matter of fact, Chinese at that time worked as farmhands shared rooms in the boarding houses. There were as many as 1,000 to 1,500 Chinese people living in Locke. Lorraine only remembered some good time when she was growing up like swimming in the nearby Sacramento River with friends and cousins. However she remembered she got into trouble one time when she went to a brick building and commented,”Why is this school called white school? It should be called red school.” She didn’t realize at the time Chinese were segregated from the whites until later. When they were finally integrated, she was so looking forward to the senior prom, but it was cancelled because they were not allowed to touch hands.

Now the population of Locke is predominantly white, and I was told it has no more than 10 Chinese families. Most of the descendants of the Chinese families got better education and moved out and joined the American mainstream for white-collar jobs. However the Locke Foundation that is dedicated to the preservation of the Locke’s historic legacy has been trying to bring more Chinese back. So when we wandered around to the end of the Main Street, we ran into this artist who just won the battle in the court and bought this property for her studio. Where we had lunch, the white owner of the cafe said she lost the battle, because the Chinese-Americans had the first right to purchase any buildings in Locke for the sake of preserving its history and culture. How interesting! Discrimination reversed.

Photo 1: Lorraine and me. 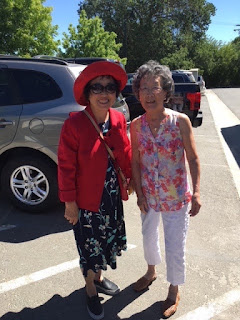 Photo 2: Kenny in front of the Main Street where you can find a Chinese school, a souvenir shop, a Chinese medicine store, and a couple of American restaurants, a gambling hall museum, an art gallery, studio, and a Chinese restaurant. However, at one one time, it had four restaurants, a half dozen markets, dry goods stores, five warehouses, a post office, two slaughter houses, a flour mill, canneries, shipping wharves, an opera, speakeasies during prohibition and five gambling houses. According to the history in the Visitor Center, “Locke is the legacy of the extraordinary efforts made by the Chinese in developing agriculture in California.” 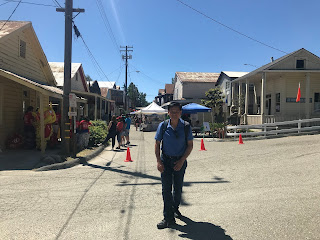 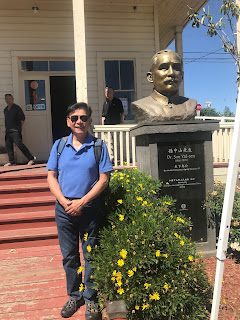 At the entrance of the Main Street, you cannot ignore the beautiful Chinese school, Joe Shooing School 周崧学校 still standing!  This is where the Chinese children spent extra time to study Chinese language and culture, heritage and traditions on top of their what curriculum they received in American schools.  in front of the school, there are two busts, one is Dr. Sun Yat-sen, the founding father of the modern China that was established in 1911.  The other one is Confucius, the Master Teacher of China. During China’s Revolutionary War, Dr. Sun traveled to the Sacramento Delta region in 1909 and 1910 to rally support and raise funds, since most of the Chinese here came from the Pearl River Delta Region in Guangdong Province in Southeast China where Dr. Sun lived. The building was built in 1915 with funds from Dr. Sun’s Kuomingtong (KMT) and it became a school in 1926. Inside of the school, there is a photo of Dr. Sun on the wall, and all the writings were in traditional Chinese, not in simplified Chinese, and also there is a flag of Republic of China (Taiwan), not the five-star flag of People’s Republic of China, and the national anthem of Republic of China. ( See photo 4. ) 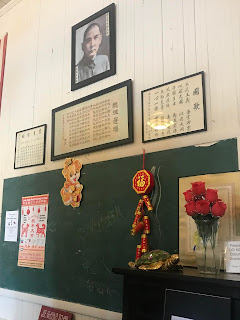 In 1990 National Park service of United States Dept. of the Interior has designated Locke as National Historic Landmark because “it is the largest and most complete example of a rural Chinese-American community in the United States. No comparable district exists that so clearly illustrates rural Chinese American life.”  Not until 2006, the Memorial Garden was built . Decedents of the original residents came back and added a wall with bricks identifying their names and quotes. One quote said “When you drink the water, remember the spring” 飲水思源.  How true! No matter where they are now in the US, the descendants want to remember where they came from! It all started in the early 1900’s in Locke. (See photo #5) 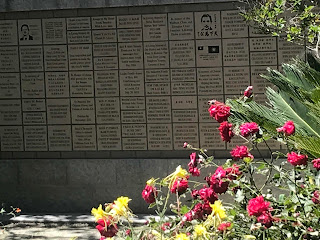 When we were looking for a place to eat lunch, I noticed a sign in both Chinese 大來賭舘 and English Dai Loy Gambling House, I couldn’t pass it up.  Kenny and I both went in and looked around ( photo #6).  The lights were dim and different games like dice were on display.  One room seemed to be the control room where people would manage the money. Very interesting! At its peak, there were four gambling houses for thousands of Chinese laborers.  I can understand when so many Chinese couldn’t have their families come over from China during the Chinese Exclusion Act era (1882-1943), people needed a place to spend their money and time. 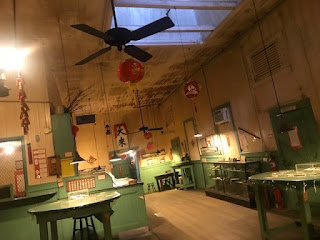 Conclusions:
I don’t know why all my non-Chinese seniors on the bus wanted to take this tour to Locke, but Kenny and I left this place very satisfied.  I have learned more about the struggles of the Chinese immigrants who came before me, and this place seemed so peaceful on the day we visited.  However I can imagine in the early 1900’s, these Chinese families would get together around tables to share a feast, and children would play nearby.  Just like Lorraine said they were looking forward to a good time with other children. At least she was well protected in the Locke community. Not like the horror story I heard on PBS “Chinese Exclusion Act”, when some 28 Chinese miners were killed and 15 were injured. White rioters burned 78 Chinese homes.  I am thankful Lorraine seemed very confident and happy.  She is just many other Chinese descendants of Locke families have integrated into the mainstream.

If you are interested in visiting this place, it is located 1/2 mile north of Walnut Grove, CA by Hwy 5. 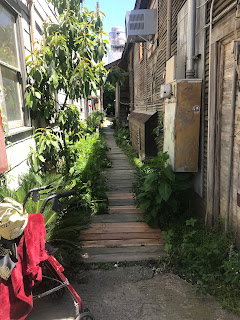