CHINESE-AMERICAN CULTURAL EXCHANGE DURING THE CORONAVIRUS PANDEMIC
By Winny Lin

The coronavirus pandemic not only has caused paramount economic problems for the world and caused astronomic numbers of death, it also has stirred an anti-Chinese movement in the United States. Science has been tossed aside and a few Americans are eager to blame Chinese for the crisis, since Wuhan, China was the first city shut down by coronavirus.

In California, our governor Gavin Newsom issued his statewide “Shelter-in-Place” order  on March 19, and announced,”We have to meet this moment!”

However, the crisis brought opportunities just like the Chinese characters 危机. The first character means CRISIS  and the second one means OPPORTUNITIES. Our South Bay chapter members have created opportunities to “meet this moment”!

Somehow I reconnected with an old friend, Mr. Junsheng-jason Wen, who was recently promoted as the principal of #9 Senior High School in Anshan, Liaoning, China. Mr. Wen is a young and innovative educator whom I have known since 2007. He invited me to speak to his students who are mainly from either rural area or urban broken homes to broken their horizons. We tried Trecent, Skype, and finally decided on the platform of WeChat, the Chinese Facebook. Nine people could be on at one time meeting ‘face to face”. Our first meeting was to discuss what the students would like and they decided on “how to improve their conversational English and increase their vocabulary. I then invited some native speakers to join us.  Our first guests were two American high school students from Walnut Creek, CA, Kellie Hintzoglou and Abby Young, to compare and contrast the Chinese and American high schools. A perfect topic!

As it turned out three of the students at our first meeting were musicians. Jimmy Li plays guitar, Iris Li Chinese flute, and Nicholas Li piano. Who knew I happened to see Yo-yo Ma interviewed on PBS News Hour on TV. After he performed Dvorak’s “Going Home”, he encouraged musicians worldwide on all skill levels to join him in providing comfort amid the global crisis.  I quickly sensed this was one of those “opportunities” open to our Chinese young musicians.

These three were so willing and in no time they sent me their musical videos:
Jimmy did his own original rap in Chinese and English, “We should wear masks and we should stay home…. We learn some skills, joking, dancing, studying and we will be ok!”

Iris played her Chinese flute and recited a poem in English about the coronavirus, “It is a war  agains virus with doubts, fears, rumors ad discrimination.  All of us are fighters in this war…..”

and Nicholas played his original piano piece. I was very impressed! Then I submitted them to PBS Facebook page CANVAS and they subsequently published all three videos. Both Principal Wen and I were extremely proud that his 3 students out of 900 from his rural school in Anshan, China got a shining moment on American Facebook.

Some of our South Bay Chapter members joined us on the WeChat sessions. First Chet Gnegy spoke with the musicians about his work and interest, even when he was in Vietnam (Thanks to the modern technology!) Another time Yanshuo Zhang talked to the students about her life journey from when she first visited the States as a 16-yr-old high school student to attend an American university, and now is an instructor at Stanford University.

Later I invited John Marienthal, chair of our South Bay Chapter.  John has visited all the 26 provinces of China and taught English in Xinjiang and Shanghai respectively for years.  He has the experience and passion and now he is the main American facilitator of two Sunday English sessions to help Chinese high school students improve their English and American culture.

Typical topics of discussion were “Festivals and sports in China and America”, “50th Anniversary of Earth Day and Volunteering to Help others”, “What activities do you do during and after school?” And “What are the top attractions of your city Anshan?”

The topics were chosen in sync with their school English curriculum and to help the students understand the world outside of Anshan, China. Mr. Wen is striving to help them develop a global view and at the same time to get them excited about life. After a month, I believe we are making good progress towards these goals. The South Bay chapter is doing its part to continue our interactions with China and the people even during these trying times as the coronavirus  pandemic hits us all hard.

Anshan, Liaoning is located in northern China, about 92 kilometers south of the capital Shenyang where the USA has a consulate. It is the 3rd most populous city with 3.5 million people and famous for its Anshan Steel Company and its soft jade mining.

Note: I made this screenshot on March 28, 2020. Mr. Jason Wen, the principal of #9th Senior High School. in the bottom row next to me. John Marienthal is far left in the middle row.
Thank you, John,  for your continuous work every week.
Posted by Winny Lin at 3:48 PM No comments:

Please invite your family and friends to join us for the annual celebration! 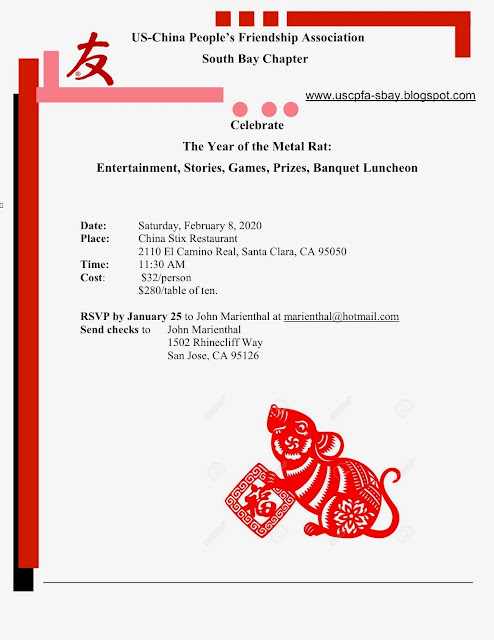 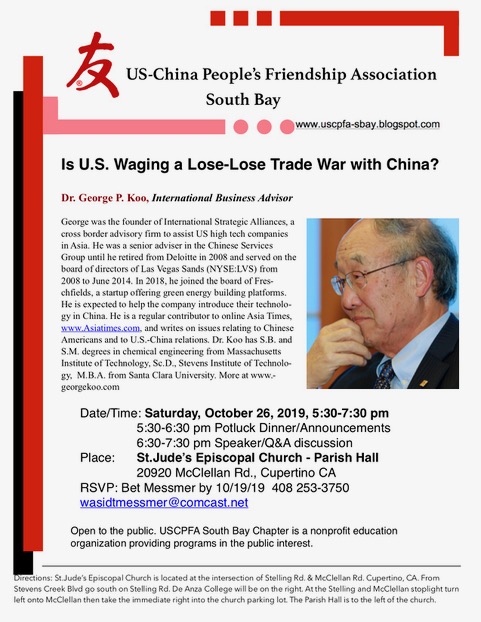 We CAN Change and We MUST implores June Speaker