Dr. George Koo joined us Sunday, August 9 to discuss the recent formation of the Asian Infrastucture Investment Bank. The AIIB was formed for two basic reasons, explained Dr. Koo.
1) The 2008 Financial Crisis sent a shock wave through China, shaking the confidence it had in America’s ability to make the right financial decisions.
2) In order to make a decision the IMF must have 85% agreement. However, as the US has 16.6 percent majority, they can veto any decision. China wanted more say in the World Bank and IMF, but Congress refused.
So, on October 2, 2013, President Xi Jinping raised the idea of creating a new investment bank the purpose of which is to modernize third-rate counries. By the following year 22 prospective nations had signed on. While Obama spent many months in the beginning of this year travelling about and warning people not to get involved, the UK joined in March and by the end of the month all of the major first-world countries had joined except for the US and Japan.
The key aspects of the bank are:
1) There is no outright veto power in day-to-day operations. A decision requires 75% majority. While currently China has 26% voting rights, as they are investing 30% of the initial capital, that percentage can change and is dependent on monetary participation.
2) The Board of Directors will comprise unpaid members who do not reside in the same location as the bank.
3) Bidding of projects is open to non-members.
4) Starting capital is 100 billion dollars.
In addition to the AIIB, China is also working on a BRICS Bank, made up of five countries—Brazil, Russia, India, China, and South Africa. Each country will contribute $20 billion dollars, and each will have an equal vote. The purpose of both of these organizations is to raise infrastructure. It is estimated that the coming decade will require 7-8 trillion dollars in infrastructure. So these two new banks are a drop in the bucket.
“The advantages for China are several,” said Dr. Koo. “China is not just doling out riches.” They are doing this
1) to make friends among Asian countries
2) to create opportunities for China’s construction and engineering companies
3) to create further regional and global economic integration,
4) and to facilitate the eventual internationalization of the Renminbi.
This last one gave several audience members pause. “What?” asked one man. “Why would we want that?”
Dr. Koo pointed out that while the dollar feels as if it has been around forever, it’s really a recent phenomenon. (The dollar was first created in 1786, and only became the international currency standard after WWII.)
The benefit for the world, Dr. Koo noted would be:
*Fill an investment void. (Currently Asia Development Bank only meets less than 2% of the total investment needs in Asia.)
*Strengthen and facilitate growth in Asia.
“There are no disadvantages to this program,” said Dr. Koo. “There are way too many projects that need financing. In fact, the only disadvantage is psychological. The U.S. doesn’t like the limelight taken from the IMF.” He paused. “But we’re all big boys. We’ll get over it.”
(Dr. Koo will be a guest on this weekend's "All Things Considered"--NPR, Saturday August 15th to discuss the anniversary of the end of WWII. Check your local listings for the correct time for your area.)

Posted by Jana McBurney-Lin at 6:08 PM No comments: 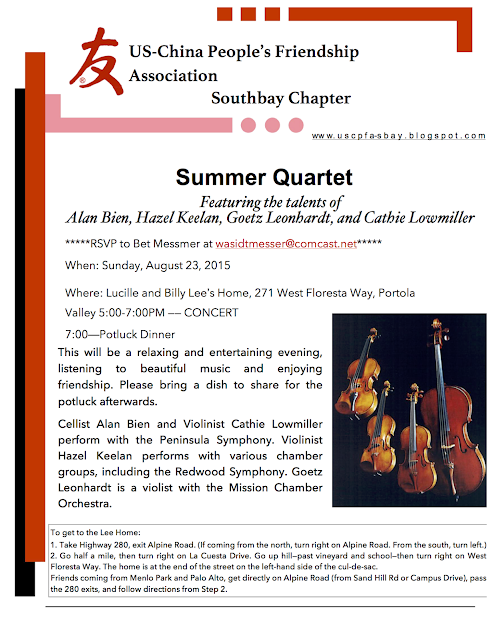 Posted by Jana McBurney-Lin at 10:03 PM No comments: